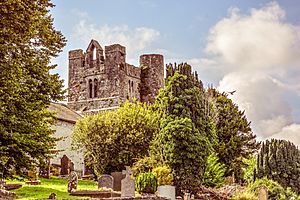 Another view of the tower, with bell-cot visible.

Balrothery Tower is a tower house and a National Monument in Balrothery, Ireland.

Balrothery Tower is found in Balrothery, east of the R132.

An Anglo-Norman ally of Strongbow, Robert de Rosel, was granted Balrothery in c. 1171 "where he built the town and castle". The name derives from the Irish Baile an Ridire, "the knight's town." His son Patrick became the parson of the church in Balrothery, and after his death Geoffrey de Costedin donated lands at Balrothery to Tristernagh Abbey, Kilbixy between 1191 and 1212.

In the northwest corner is a turret with spiral stairway.

All content from Kiddle encyclopedia articles (including the article images and facts) can be freely used under Attribution-ShareAlike license, unless stated otherwise. Cite this article:
Balrothery Tower Facts for Kids. Kiddle Encyclopedia.