The bandurria is a plucked chordophone from Spain, similar to the mandolin, primarily used in Spanish folk music, but also found in former Spanish colonies.

Prior to the 18th century, the bandurria had a round back, similar or related to the mandore. It had become a flat-backed instrument by the 18th century, with five double courses of strings, tuned in fourths. The original bandurrias of the Medieval period had three strings. During the Renaissance they gained a fourth string. During the Baroque period the bandurria had 10 strings (5 pairs).

Variations and uses in different parts of the world 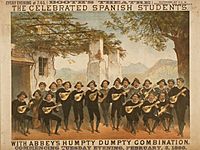 The Spanish Students, who were first brought to the United States by Henry Eugene Abbey's firm in 1880. They played bandurrias, but confusion in the United States led people to believe the instruments were mandolins. This poster was for a Manhattan performance at the Booth's Theatre on the corner of 6th Avenue and 23rd Street in Manhattan.

Painting by Ramon Alorda Pérez, 1878, showing a woman playing a bandurria that has square shoulders. The square-shouldered bandurria was a distinct shape of Spanish bandurrias of the 18th century.

Juan Ruiz first mentioned the term "mandurria" in the 14th century in his "Libro De Buen Amor." After that, Juan Bermudo gave the description of the bandurria in his "Comiença el libro llamado declaraciõ de instrumentos" as a three-string instrument in 1555, but he also mentioned other types with four or even five strings. In the early 1870s, a child's wake was accompanied with the bandurria music in Jijona, Alicante Province. The zapateo, a dance derived from the Spanish zapateado and introduced by tobacco cultivators from the Canary Islands, is accompanied with bandurria and other instruments before 1900. 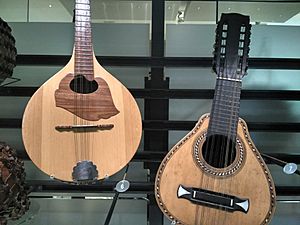 Bandurria (right) with mandolin in the Horniman museum, London, UK.

There are also many different varieties of bandurria in South America, especially Peru and Bolivia. They have four courses, unlike the traditional Spanish six courses. The four courses are double, triple or quadruple, and the tuning is guitar-like, rather than the fourths tuning used on the Spanish type. In Lima, Peru, harp and bandurria duos were common in the early 20th century. Nowadays people there still play bandurria accompanying with the popular vals peruano, or vals criollo.

Although generally little known in the UK, the bandurria was used by Roy Williamson of the Scottish folk-group The Corrie Folk Trio. When this group later (after the loss of one member) became the Corries, Williamson incorporated a bandurria into one of the two multi-instrument "combolins" that he constructed for himself and his partner.

All content from Kiddle encyclopedia articles (including the article images and facts) can be freely used under Attribution-ShareAlike license, unless stated otherwise. Cite this article:
Bandurria Facts for Kids. Kiddle Encyclopedia.