The Bank of America Tower is a highrise in downtown Phoenix, Arizona. The tower is the centerpiece of the Collier Center, a multi-use office and entertainment complex. The tower was completed in 2000 and serves as the state headquarters for Bank of America. It rises 360 feet (110 m), topping out at 23 floors. It was designed in the postmodern style by Opus Architects and Engineers.

A Bank of America branch, main lobby, and elevators to the upper floors are located on the second floor. Bank of America also occupies floors 19 - 24. There is no floor designated as 13. 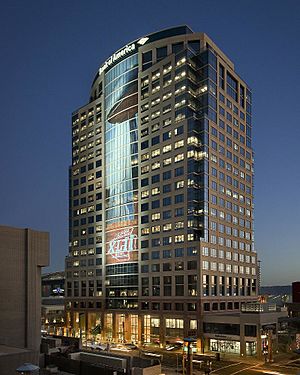 In January, 2008, the tower was covered with a graphic of the Vince Lombardi Trophy in anticipation of Super Bowl XLII. The image was on the north face of the building overlooking Copper Square and spanned 18 floors. Bank of America Tower joined Hyatt Regency Phoenix in Downtown Phoenix with their temporary football themed decor.

In February, 2009, the east and south faces of the tower were covered with T-Mobile branded messages in anticipation of the 2009 NBA All Star Game. Elite Media, Inc. of Las Vegas completed installation of Phoenix’s Largest Ad on the exterior of the Bank of America Tower in Downtown Phoenix. The south façade ad stood at 190' tall by 188’ wide, and the east façade ad at 190’ tall by 94’6” wide. The 53,694 total square feet of ad space was formed out of over 1400 individual panels to create the large mural images. The Elite Media Wall System panels measured at 4’ x 20' and each was constructed out of a unique, weather-resistant, "see-through," perforated, adhesive material. Job installation took two weeks and required 5 installers hanging from scaffolding off the 380-foot (120 m) façade.

All content from Kiddle encyclopedia articles (including the article images and facts) can be freely used under Attribution-ShareAlike license, unless stated otherwise. Cite this article:
Bank of America Tower (Phoenix) Facts for Kids. Kiddle Encyclopedia.