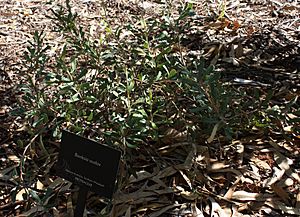 Banksia audax is a species of shrub that is endemic to Western Australia. It has fissured, grey bark, woolly stems, hairy, serrated leaves and golden orange flower spikes.

Banksia audax was first formally described in 1928 by Charles Gardner from specimens he collected in 1926. Gardner gave it the specific name "audax", meaning "bold" in Latin, in recognition of its "boldness" in growing so far inland.

This shrub belongs to subgenus Banksia, section Banksia, series Cyrtostylis. It has no close relatives. B. benthamiana (Bentham's banksia) and B. laevigata (tennis ball banksia) are taxonomically closest to it, but these are both larger shrubs without lignotubers.

Banksia audax occurs from near the town of Southern Cross, south almost to the coast. It occurs amongst heath and in mallee communities, growing in sandy yellow loam.

Seeds do not require any treatment, and take 19 to 46 days to germinate.

All content from Kiddle encyclopedia articles (including the article images and facts) can be freely used under Attribution-ShareAlike license, unless stated otherwise. Cite this article:
Banksia audax Facts for Kids. Kiddle Encyclopedia.