Banksia trifontinalis is a species of openly-branched shrub that is endemic to the southwest of Western Australia. It has broadly linear, coarsely serrated, sharply pointed leaves, pale yellow flowers in heads of about sixty, and oblong to egg-shaped follicles.

The type specimen was collected west of Three Springs, Western Australia by Alex George on 6 August 1986. George published a description of the species in 1996 in the journal Nuytsia, naming it Dryandra trifontinalis. The specific epithet is from the Latin tri- ("three") and fontinalis ("of a spring"), in reference to the town of Three Springs.

In 2007, all Dryandra species were transferred to Banksia by Austin Mast and Kevin Thiele and this species was given the name Banksia trifontinalis. 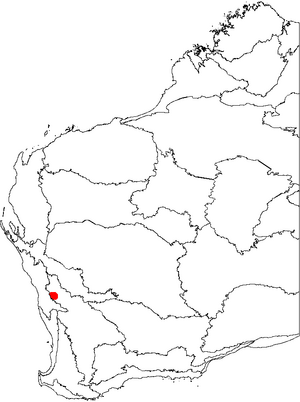 Distribution of B. trifontinalis, shown on a map of Western Australia's biogeographic regions.

Banksia trifontinalis occurs only in a few populations in the vicinity of Arrino and Three Springs in the Geraldton Sandplains biogeographic region. It is locally common, and grows on lateritic soil in low woodland.

This banksia is classified as "Priority Three" by the Government of Western Australia Department of Parks and Wildlife meaning that it is poorly known and known from only a few locations but is not under imminent threat.

All content from Kiddle encyclopedia articles (including the article images and facts) can be freely used under Attribution-ShareAlike license, unless stated otherwise. Cite this article:
Banksia trifontinalis Facts for Kids. Kiddle Encyclopedia.