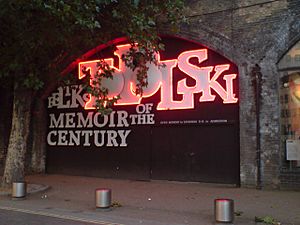 Bar Topolski (previously known as the Topolski Century and Memoir of the 20th Century) is a bar and cafe in the Hungerford Bridge arches on the South Bank in London, England. Previously a gallery, it presented a large artwork by Feliks Topolski (1907–1989). In 2013, as a result of low visitor numbers and rising rents, the gallery became a bar, with some of the artwork remaining on display and the remainder being moved to a private studio.

All content from Kiddle encyclopedia articles (including the article images and facts) can be freely used under Attribution-ShareAlike license, unless stated otherwise. Cite this article:
Bar Topolski Facts for Kids. Kiddle Encyclopedia.