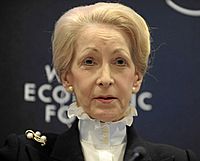 Barbara Thomas Judge, Lady Judge, CBE (née Singer; 28 December 1946 – 31 August 2020), previously known as Barbara Singer Thomas, was an American-British lawyer and businesswoman. She was the first female chairman of the Institute of Directors. She was made chair in 2015.

In 2018, she was suspended from the Institute of Directors after people accused her of being sexist and racist.

Judge was born in New York City. She studied at the University of Pennsylvania and at New York University. She was married to Sir Paul Judge between 2002 until his death in 2017.

All content from Kiddle encyclopedia articles (including the article images and facts) can be freely used under Attribution-ShareAlike license, unless stated otherwise. Cite this article:
Barbara Judge Facts for Kids. Kiddle Encyclopedia.