Barclay's Battery is a heritage-listed stamper battery at Collinsville road, Mount Coolon, Whitsunday Region, Queensland, Australia. It was built from 1914 to 1932. It is also known as Mount Coolon Gold Mines Battery. It was added to the Queensland Heritage Register on 17 May 2004.

Mount Coolon is situated approximately 130 kilometres (81 mi) south-west of Collinsville, and 200 kilometres (120 mi) north of Clermont. Luke Reynolds, a jackeroo from Yacamunda station, discovered gold there in 1913. Thomas Coolon was the first to peg a claim in 1914, but other claims were quickly taken up, including one of the most active prospectors, James Barclay. 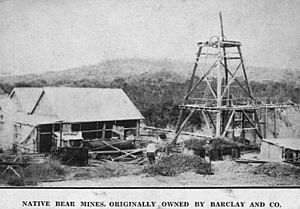 James Barclay mined gold, at what became the Native Bear lease, from 1914 when he constructed a 5 head battery on the present site at Police Creek, 2.4 kilometres (1.5 mi) from the mine. In 1917, the Sydney lease owners Hooke and Sutherland erected 10 stamps nearby, and Barclay consolidated claims to form the Native Bear lease, which was the most valuable section of the gold lode. That same year Barclay erected another 15 head of stamps, two Cornish boilers, machinery, an assay plant and smelting furnace and a 23-metre (75 ft) chimney made out of 200,000 local bricks at his Police Creek battery. Barclay had begun operating a cyanide plant by 1918.

A township called Koala (now Mount Coolon) was surveyed on Police Creek in 1917.

The slow development of the Mount Coolon goldfield was attributed to the absence of a custom battery, so in 1924 an Empire ball mill was erected on a site near the Mount Coolon battery on Police Creek, while Barclay installed a powerful gas suction engine early in the year to replace the steam power plant to run all his plant and equipment. The Sydney battery was still operating on Police Creek, making a total of three working mills.

By June 1932 Mount Coolon Gold Mines had taken over all the batteries and mines on the lode and built a new dam (the existing one) on Police Creek. Mr Cec Hammond, a teamster carting lime and wood to the company's plant, lived in the cottage near the weir.

In 1932 Mount Coolon had the highest gold production in Queensland and the Mount Coolon Gold Mines No Liability Company, who had bought out Barclay, had erected a large reduction and cyaniding plant 2.3 kilometres (1.4 mi) south of the town.

At Mount Coolon in 1935, a six-month industrial conflict occurred which marks an important milestone in Queensland's industrial relations history. Analysis of the events leading up to and during this strike ably reveals many of the difficulties and tensions associated with isolated mining operations in semi-arid Australia.

The dispute, which involved only some one hundred employees, also throws a glimmer of light on management tactics; relations between the Australian Workers' Union (AWU) and employers; collaboration among mining companies; and the alignment of ideological forces in the Queensland labour movement in the 1930s.

This strike was to acquire all the hallmarks of a bitter and drawn our industrial action in which rank and file unionists were pitted against not only the mine's management, but also other workers, and more particularly their own union - Australian Workers' Union (AWU). This industrial action had been initiated by local action in April 1935, without any reference to the union organisation or leadership at either the district or state level. The trouble was exacerbated by the oppressive living conditions of this semi-arid region, compounded by the severe drought during the summer of 1934-35.

In the late 1930s the Mount Coolon goldfield was also significant as a profitable concern for its parent company, Gold Mines of Australia, which in turn, was the catalyst for the early growth of the mining giant, Western Mining Corporation. However, by 1941 those operators left on the field had disposed of most of their machinery and abandoned their leases.

In 1947 prospecting recommenced for alluvial gold and bismuth, and alluvial gold was treated in new plant installed by L.F. White.

The place extends from the northern perimeter of Mount Coolon township, northeast along Police Creek to include the weir and the former Hammond house. The mill site includes a square brick chimney, concrete foundations of a 10 head stamp battery, two mortar boxes, gas producer, two-cylinder gas engine (partly demolished), one-cylinder Crossley engine, ball mill and a steel vat. Timber, stone and concrete foundations of the cyanide plant are located south of the mill, closer to the Mount Coolon Hotel.

The machinery consists of:

Barclay's Battery was listed on the Queensland Heritage Register on 17 May 2004 having satisfied the following criteria.

Barclay's Battery is located within the Mount Coolon goldfield. The remaining structures and features demonstrate the evolution of the gold-mining industry in north Queensland, including the growth, upgrading of operations, and subsequent company takeovers often associated with early mining endeavours, through to the eventual decline of operations at this isolated location in 1941.

The battery site comprises a brick chimney, ball mill, stamp mill remains, and rare cross compound gas engine which demonstrate some of the machinery functions of mining operations that were carried out at Mount Coolon.

All content from Kiddle encyclopedia articles (including the article images and facts) can be freely used under Attribution-ShareAlike license, unless stated otherwise. Cite this article:
Barclay's Battery Facts for Kids. Kiddle Encyclopedia.