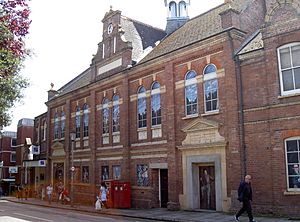 The Barnfield Theatre is a theatre in Exeter, England, located near the centre of the city on Barnfield Road, Southernhay. It was originally built as the Barnfield Hall near the end of the 19th century by Exeter Literary Society, and was converted to a theatre in 1972.

Today the theatre is operated as a charity and is used as a venue for amateur and professional theatrical companies. The building is owned by Exeter City Council and leased to Barnfield Theatre Limited, who run the theatre. In January 2007 it received £200,000 to refurbish its interior.

The main auditorium is fully furnished with stage and lighting equipment; 289 tip-up seats which were reupholstered in 2005 and in full rake for complete view of the stage from all parts of the theatre. It is also suitable for conferences, lectures and displays as well as stage productions.

The Clifford Room can be used for many different purposes, these include a studio theatre or conference room. The seating is modular and can be raked, and can be arranged for any theatrical requirements (e.g. theatre in the round, traverse etc.). It was renamed as the Clifford Room, after Clifford Scott, in 2007 Having previously been the Bedford Room. The room can accommodate up to 80 people seated.

The main foyer to the theatre was lightly updated in 2015. The space now houses the Barnfield Theatre Front of House Gallery which is used by professional and amateur artists, photographers and creative groups to display their work.

All content from Kiddle encyclopedia articles (including the article images and facts) can be freely used under Attribution-ShareAlike license, unless stated otherwise. Cite this article:
Barnfield Theatre Facts for Kids. Kiddle Encyclopedia.