Regelia velutina, the Barrens regelia, is a species of flowering plant in the myrtle family Myrtaceae. It is endemic to the south-west of Western Australia. It is a large shrub with greyish green, velvety leaves and large clusters of brilliant red to orange flowers on the ends of its branches in spring and summer.

Regelia velutina is a large shrub, sometimes a small tree growing to a height of 6 m (20 ft), with long, straight stems. Its leaves, which are up to 13 mm (0.51 in) long are arranged in alternating pairs (decussate) so that they make four rows along the stems.

The flowers are reddish-orange, sometimes yellow, and arranged in almost spherical heads on the ends of branches which continue to grow after flowering. There are 5 sepals, 5 petals and 5 bundles of stamens in each flower. Flowering occurs from September to November, sometimes to February and is followed by fruit which are woody capsules. 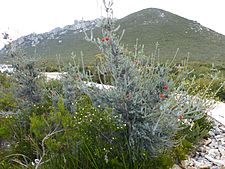 The species was first formally described by Russian botanist, Nikolai Turczaninow in 1852 who named it Beaufortia velutina. In 1964, the Australian botanist Charles Austin Gardner transferred it to the genus Regelia. The specific epithet is derived from the New Latin velutinus, meaning "velvety".

It is listed as "not threatened" by the Government of Western Australia Department of Parks and Wildlife.

Although it has attractive foliage and flowers, R. velutina is not common in cultivation. It does not grow well in areas of high summer rainfall and humidity. In drier climates it prefers well drained soils. It is easy to propagate from seed but the leaves may rot if mist propagation systems are used. Its commercial potential for export as a Christmas flower has been assessed.

All content from Kiddle encyclopedia articles (including the article images and facts) can be freely used under Attribution-ShareAlike license, unless stated otherwise. Cite this article:
Barrens regelia Facts for Kids. Kiddle Encyclopedia.