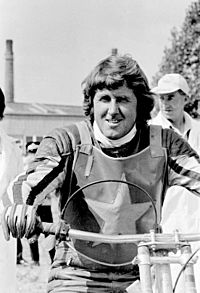 Briggs retired from British league racing in 1972 after an accident, but returned in 1974, then announcing in 1975 that this would be his last season yet retired in 1976.

In 1973 Briggs was awarded an MBE for his services to sport and in 1990 he was added into the New Zealand Sports Hall of Fame.

All content from Kiddle encyclopedia articles (including the article images and facts) can be freely used under Attribution-ShareAlike license, unless stated otherwise. Cite this article:
Barry Briggs Facts for Kids. Kiddle Encyclopedia.