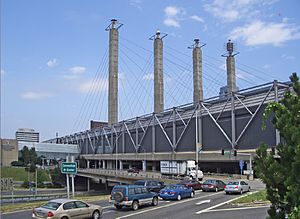 The Bartle Hall Pylons are four concrete, steel columnar structures built to support steel cables that suspend Bartle Hall Convention Center above Truman Road and Interstate 670 in Kansas City, Missouri, USA. They are approximately 335 feet (102 m) high and are topped by four sculptures that make up the city's skyline.

The sculptural elements that crown the Bartle Hall pylons, called "Sky Stations", were designed by artist R.M. Fischer in 1994. Each of the works is made of aluminum and steel, approximately 24x15-feet in diameter, and 20x25-feet in height. They were primarily inspired by the 1930s Art Deco chandelier and decorative design elements throughout Municipal Auditorium, which is adjacent to Bartle Hall.

The Sky Stations were placed atop each pillar via helicopter.

Lightning damage was found to the easternmost Sky Station during an inspection in the fall of 2015. The sculpture was removed for repair on May 8, 2016. The repair project cost $1.6 million, all but $250,000 was covered by insurance. The repaired Sky Station was reinstalled on September 18, 2016. As part of the repair project electricians installed 50 LED lights, which are now being used to light the downtown skies.

All content from Kiddle encyclopedia articles (including the article images and facts) can be freely used under Attribution-ShareAlike license, unless stated otherwise. Cite this article:
Bartle Hall Pylons Facts for Kids. Kiddle Encyclopedia.