Basalt was a station on the Carson and Colorado Railway. 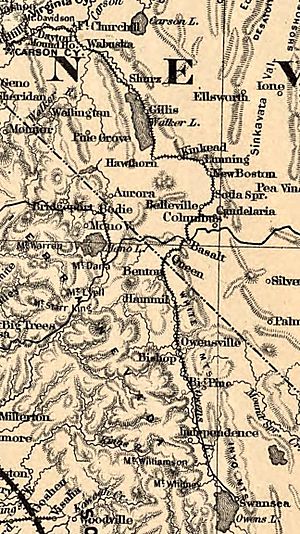 Route of the Carson and Colorado Railway in 1883 showing Basalt

The Basalt Post Office operated from March 1906 until August 1906.

In 1940, it was reported that Basalt had an estimated population of 6 and that it was a small supply center for prospectors.

In 1944, quarrying of diatomaceous earth commenced again. In 1945 the United States Diatom Company sold its claims at Basalt to the Dicalite Company. In 2018, 15 employees worked at the mine, which straddled Mineral and Esmeralda counties, producing 2,268 tons of diatomaceous earth.

All content from Kiddle encyclopedia articles (including the article images and facts) can be freely used under Attribution-ShareAlike license, unless stated otherwise. Cite this article:
Basalt, Nevada Facts for Kids. Kiddle Encyclopedia.