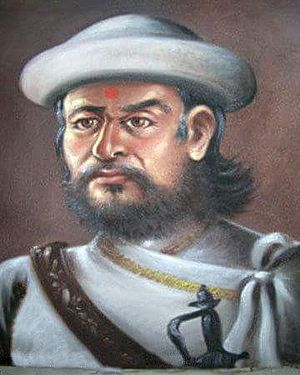 Some of the Basnet clans are Shreepali Basnet, Khapatari Basnet, Khulal Basnet, Lamichhane Basnet and others.

Shreepali Basnet is clan among Basnet. They claim Bharadwaj Gotra. This clan was politically significant than other Basnet clans. Shivaram Singh Basnyat, the commander of Gorkhali forces belonged to Shreepali Basnet clan. Abhiman Singh Basnet was a minister of Kshetri caste.

Khapatari/Khabatari Basnet is another clan among Basnets. They claim Kaushik Gotra. Khabatari claim their lineage to Raghuvanshi King Ram. Some of the Khabatari Basnets were warriors in the Nepalese Army. Colonel Pahalman Singh Basnyat of this clan was awarded with the title of "Shree 1" prefix. General Singha Bahadur Basnyat, the Chief of Nepalese Army belonged to this clan.

All content from Kiddle encyclopedia articles (including the article images and facts) can be freely used under Attribution-ShareAlike license, unless stated otherwise. Cite this article:
Basnet Facts for Kids. Kiddle Encyclopedia.