Kshetri or Chhetri (Nepali: क्षेत्री) are group of people belonging to Kshatriya caste in Khas group, an Indo-Aryan ethno-linguistic group. Generally, the Parvate/Pahari (hilly) Kshatriyas are called as Kshetris or Khas Kshetris. Many historians called Kshetris as Khas Rajputs. Kshetris served as rulers, administrators, governors and warriors as per their caste. They were able to dominate most of the Nepalese history through monopolizing government and military upto 1951 AD. After democracy in Nepal, Kshetris were still visible in the government especially dominating Panchayati government and still monopolizing military.

Chhetri is Nepalese local colloquial term for Kshatriya. Kshetri (Nepali: क्षेत्री) is considered a derivative form of the Sanskrit word Kshatriya. Hill-Kshetri, Kshetri, Chhetri, Pahadi Chhetri and Khas Kshetri are all used to denote this caste. 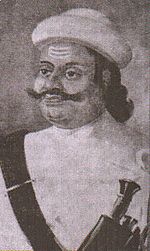 Leader of Pande Kshetris at the Unification of Nepal

They are descended from old warriors of Khas Kingdom. Chhetri dominated the military forces of Shah dynasty of Nepal. The 5 main Chhetri families at Royal court of Nepal formed group called Kaji Khalak (Aristocrats). They are; Basnyat, Pande, Thapa, Kunwar and Bista. Basnyat, Pande and Thapas were most powerful Chhetri groups led by Shivaram Singh Basnyat, Kalu Pande and Birbhadra Thapa at the Unification of Nepal. The Kunwars were led by Ramkrishna Kunwar and Bista/Bisht were led by Gajabal Bista and Atibal Bista. Sometimes, Bhandari Kshetri family of Jaswanta Bhandari was also considered as Kaji Khalak family of the Royal court of Nepal.

Leader of Basnyats at the Unification of Nepal

Leader of Kunwars at the Unification of Nepal

In the court struggle for power, Pande Khalaks and Thapa Khalaks were fierce opponents. They often opposed each other. Pandes were supported by Basnyats due to blood relations. Thapas were supported by Kunwars due to blood relations. In the end, Kunwars betrayed Thapa groups by murdering the Thapa leader Mathabar Singh Thapa. That caused Kunwars to rise to power and all Kshetris were thrown of power. The Kunwar high rank officers escalated quickly between 1841 AD to 1854 AD.Kunwars claimed royalty and changed their surname to Rana (meaning: King) from Kunwar (meaning: Prince). In 1951AD, democracy was established and Kshetri rule were stopped. 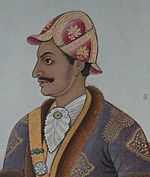 Kshetris has second highest civil service representation with 19.59% of Nepal's bureaucracy after Bahuns while having 16% of Nepal's total population. The civil service representation to population ratio is 1.18 times for Kshetri. Kshetri dominate the military forces with nearly all high ranked officers belonging to either Kshetri or Thakuri caste. Nearly, only one Chief of Army Staff (Chhatraman Singh Gurung) belonged to Non-Chhetri/Thakuri caste. Thus, the highest military rank (Chief of Army Staff previously Commander-in-Chief) is completely monopolized by Chhetri caste.they also recruit in british army in large numbers, chhetri/thakuris dominant 40% of total nepal army strength , and they have reserved regiment the 9 gorkha rifles in indian army.

Kshetri are almost all Hindus as per 2011 Nepal census. Historically, they practiced Hindu polytheism and shamanism. They generally worship their clan deity (Kul Devta), friendly deity (Ishta Devta) and Khas Masto deities. Kshetri commonly have warrior like deities as Bhadrakali, Kalika Bhawani and different forms of Goddess Kali as female deity and Rudra, Veerbhadra (ferocious forms of Shiva) as male deity. Bhadrakali, a popular form of Goddess Kali, is the main deity of the Nepalese Army (previously Gorkhali Army) due to prevalence of Kshetri commanders. Worship to these deities were necessary before wars. There was a popular folk legend that the Chinese failed the strategic attacks on 1792 AD due to the effect of religious war cry of Jai Bhawani. In the times of unification of Nepal, Kshetris were more rigid to worship of ferocious forms of Godess Kali and Lord Shiva. Amar Singh Thapa based on religious values developed Nishankalika flag after ceremoniously inviting Kalika Bhawani, ancestors, friendly deities and 49 Maruts to reside on the flag.

Rajputs and Thakuris are sometimes considered as subcaste of Kshetri while they have distinct cultural difference with mainstream Kshetris. Kshetri is an endogamous unit. They donot practice maternal cousin marriages as Thakuri caste which is the basis of cultural distinction. Kshetri has hundreds of clans. They are categorized by family deity and single gotra. They do not marry with the members of their whole maternal clan and members of their parents' maternal families as per popular quote

The maternal clan marriage prohibition also include non marriage prohibition with the Bahun counterpart of that clan. For example; Those having maternal clan as Khilchine Adhikari Chhetri cannot marry in the clan of Khilchine Adhikari Bahun as there is brotherhood between these clans. They never marry in their paternal clan and those having same gotra. Jaari marriage i.e. marrying others' wife, is not allowed. Also Gandharva and Rakshas marriages are not allowed.

Dieting rules for Kshetri were decided by Kshetri Birandala (brotherhood). Kshetri do not consume pork like Rajputs which is a basis of cultural difference. Kshetri are not allowed to eat beef, buffalo, pig, felines and all wild forms of them as per Hindu rituals for Kshatriya. Goats, sheep and all variations and forms of them, are fully allowed. Chicken, duck and goose are debatable and allowance is regionally dependent.

Historically, Kshetri has been part of the some of the powerful Pahari empires as Khas Empire and Gorkha Empire. Warriorhood, governance, administration, honesty and integrity has been linked to Kshetris. Kshetris are noted for resourcefulness and charity. Sanskrit verse from Geeta explains the basis of ethics Kshetris have derived from:

The above verse explains the duties, characters and behaviours of Kshatriya warrior. These were adapted by Kshetri community which includes exhibition of bravery and skill, prohibition of escaping any war, giving charity and Hindu governance.

All content from Kiddle encyclopedia articles (including the article images and facts) can be freely used under Attribution-ShareAlike license, unless stated otherwise. Cite this article:
Kshetri Facts for Kids. Kiddle Encyclopedia.