The original railway line opened in 1910, being used for the transport of coal from Kilcunda and Wonthaggi, and local agricultural produce, as well as for public transport. The line was closed in 1978. 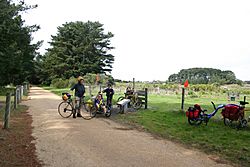 From Anderson to Kilcunda the trail drops 40 metres (130 ft) in height as it winds down through farming country. Here, the gravel path is overgrown and trail users need to negotiate several gates. The rail trail at Kilcunda is built on the coastal sand dunes and incorporates a landmark trestle bridge over Bourne Creek. Path users have panoramic scenic views of the Bass Strait coast and the Wonthaggi Wind Farm that was erected during 2005.

Heading towards Wonthaggi, the trail passes through flat agricultural fields, and is not always well maintained with grass being allowed to overgrow the path. The trail uses a few small bridges to cross the Powlett River and tributaries. The trail near Wonthaggi is packed gravel and features the heritage listed Wonthaggi station, and the historic Central Mine Reserve.

Attractions on the trail 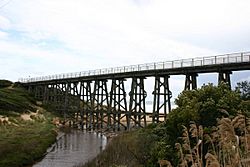 Kilcunda trestle bridge over Bourne Creek on the Rail Trail 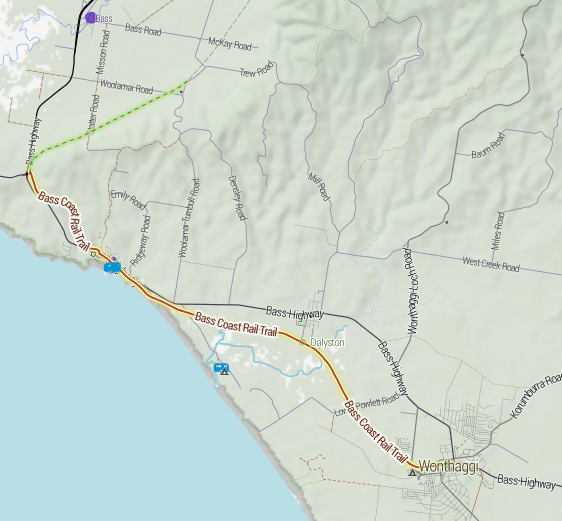 Map of the rail trail, including proposed extension to Woolamai.

All content from Kiddle encyclopedia articles (including the article images and facts) can be freely used under Attribution-ShareAlike license, unless stated otherwise. Cite this article:
Bass Coast Rail Trail Facts for Kids. Kiddle Encyclopedia.