The Battery Maritime Building is a ferry terminal at South Ferry on the southern tip of Manhattan Island in New York City. Located at 10 South Street, near the intersection with Whitehall Street, it is used for excursion trips and has been used as the ferry terminal to Governors Island since 1956. The Beaux-Arts building was built from 1906 to 1909 as the Municipal Ferry Pier. It was listed on the National Register of Historic Places in 1976. 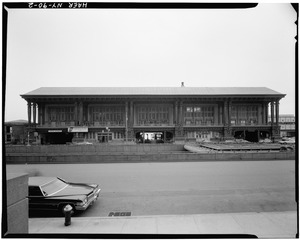 Designed by the firm Walker and Morris, it used a variety of architectural metals, including cast iron, rolled steel, and stamped zinc and copper, and the vaults under the porch roof utilize Guastavino tiles. It is the only Exposition Universelle-style ferry building still operating in Manhattan.

Approaching from the water side, the building contains three ferry piers with steel arches. The arches, in turn, are supported by four pilasters with ornate capitals. The entrances to each of the piers can be closed-off by elaborate swinging gates. The steelwork on the remainder of the building contains decorative motifs such as paneled lattice work, raised moldings, and elaborate cross bracings. The building contains a penthouse with five bays of sash windows between six pairs of columns, and a landward-facing balcony with an elaborate railing.

The building was originally constructed with a wide central stairway to large upper level waiting room. The upper level had a direct connection to the elevated train station that served it, the Staten Island Ferry Whitehall Terminal, and Lower Manhattan. The terminal had three slips: 5, 6, and 7, its lower level serving as a vehicular loading area for wagons and motor vehicles.

The structure was built from 1906 to 1909, replacing an earlier building on the site that had operated since 1887. Both the new building and its predecessor was used by ferries traveling to 39th Street in South Brooklyn (now the neighborhood of Sunset Park in Brooklyn), and as such, was named the Municipal Ferry Piers to South Brooklyn. The Brooklyn ferry service shut down on March 15, 1938, and the 140,000-square-foot (13,000 m2) building was used by various city agencies, including the Department of Marine and Aviation beginning in 1959. In subsequent years, its original multi-colored appearance was replaced by a paint color intended to emulate the copper patina of the Statue of Liberty. 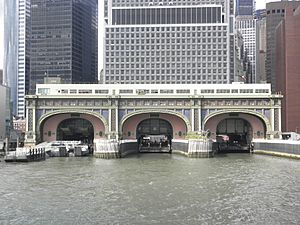 View of the ferry slips, numbered 5 through 7 (from left to right)

In 1956, the U.S. Army began using the terminal to provide service to Fort Jay, an Army post on Governors Island. Replacing smaller steam-power ferries with two larger new diesel-electric boats, the Army required larger ferry slips and docks, moving their ferry operation from an open ferry slip located at the Barge Office, west of the Staten Island Ferry Terminal to the Battery Maritime Building. When the United States Coast Guard took over Governors Island from the Army in 1966, they continued to use the terminal to provide vehicle and passenger service to the island for its 3,000 residents and 2,000 daily commuters until its departure in 1996.

Between 2001 and 2005, in a $36 million renovation, the exterior of the building and its deteriorating wooden piers were restored and its exterior repainted in its original multiple color scheme by Jan Hird Pokorny Architects.

During the summer season, public ferry service to Governors Island operates out of Slip 7 of the building. Ferries are operated by the Trust for Governors Island, an nonprofit agency created in 2003 by the City of New York. The ferry line operates with two vessels, the Lt. Samuel S. Coursen and the Governors 1. Ferry service operates from May to October.

In 2009, Dermot Construction won the bid to convert the building into a hotel. After numerous delays, including Hurricane Sandy in 2012, the project received a new round of funding in 2018, and a group including Cipriani S.A. was selected to open the hotel. The hotel is planned to contain 70 rooms and a second-floor event space.

All content from Kiddle encyclopedia articles (including the article images and facts) can be freely used under Attribution-ShareAlike license, unless stated otherwise. Cite this article:
Battery Maritime Building Facts for Kids. Kiddle Encyclopedia.