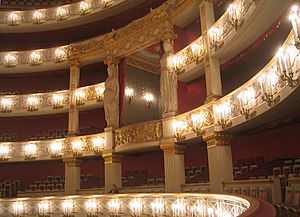 The Bavarian State Opera (in German: Bayerische Staatsoper) is an opera company based in Munich, Germany. It has been in existence since 1653. Its orchestra is the Bavarian State Orchestra. While opera performances are held in the Prinzregententheater (completed in 1901), the company's home base is the National Theatre Munich on Max-Joseph-Platz.

Peter Jonas is the General Director. He has been there since 1993 and is the first British director of any major German speaking Opera House. Since 1998 the conductor Zubin Mehta was music director of the Bavarian State Opera and Bavarian State Orchestra. He was followed in 2006 by Kent Nagano.

All content from Kiddle encyclopedia articles (including the article images and facts) can be freely used under Attribution-ShareAlike license, unless stated otherwise. Cite this article:
Bavarian State Opera Facts for Kids. Kiddle Encyclopedia.