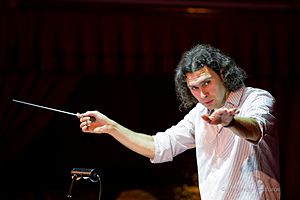 Vladimir Jurowski (born 4 April 1972 in Moscow) is a Russian conductor. He is one of the most important young conductors of today. Jurowski studied at the Moscow Conservatory. In 1990, he moved with his family to Germany, where he continued to study music in Dresden and Berlin.

In 1995 he conducted at the Wexford Festival and in 1996 at the Royal Opera House. He continued conducting in Berlin and Bologna.

In August 2000, Jurowski was named the Music Director of the Glyndebourne Festival Opera. He is now the Principal Conductor of the London Philharmonic Orchestra.

In May 2007, Jurowski received the 2007 Royal Philharmonic Society Music Award for Conductor of the Year.

All content from Kiddle encyclopedia articles (including the article images and facts) can be freely used under Attribution-ShareAlike license, unless stated otherwise. Cite this article:
Vladimir Jurowski Facts for Kids. Kiddle Encyclopedia.