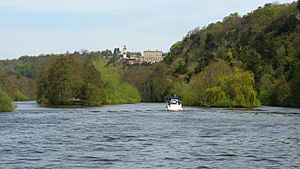 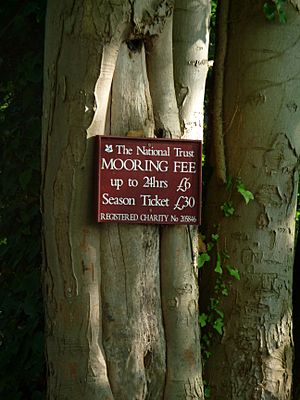 Notice of mooring fees on Bavin's Gulls, in 2008

Bavin's Gulls or Sloe Grove Islands are a group of islands in the River Thames in England on the reach known as Cliveden Deep above Boulter's Lock, near Maidenhead, Berkshire. This reach of the Thames was described by Jerome K. Jerome in Three Men in a Boat as "unbroken loveliness this is, perhaps, the sweetest stretch of all the river...".

Bavin's Gulls consists of two large and two small thin wooded strips; they are part of the Cliveden Estate and are owned by the National Trust. Overnight mooring is permitted on three of the islands but no mooring or landing is permitted on the fourth which is a nature reserve.

All content from Kiddle encyclopedia articles (including the article images and facts) can be freely used under Attribution-ShareAlike license, unless stated otherwise. Cite this article:
Bavin's Gulls Facts for Kids. Kiddle Encyclopedia.