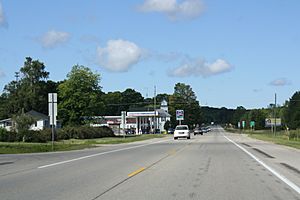 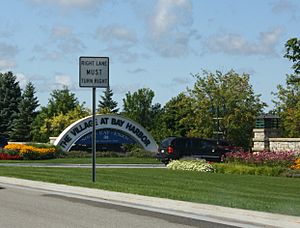 Bay Harbor is a residential and resort community that is part of the city of Petoskey in Emmet County in the U.S. state of Michigan. It is a partially gated, master-planned community. Video Here https://www.youtube.com/watch?v=wtVTDDVg1Mo

Bay Harbor is in a sheltered bay on the south shore of Little Traverse Bay on Lake Michigan. It is on U.S. Highway 31, with Petoskey, immediately adjacent to the east along the harbor. It is home to the Inn at Bay Harbor, a Boyne Resorts property.

The History of Bay Harbor

In the late 19th century, a limestone quarry was opened on property that is now Bay Harbor. Around 1917, Petoskey Portland Cement incorporated with the purpose of manufacturing cement. For over 80 years, Petoskey Portland and its later holding-company owner, Penn Dixie, provided jobs for hundreds of workers. Mining operations and a massive cement plant operated over 1,200 acres (4.9 km2) and 5 miles (8 km) of Lake Michigan shoreline on Little Traverse Bay. Ceasing operations in the 1980s, the cement plant was abandoned, leaving a brownfield landscape of chromium brick, asbestos, coal and 2.5 million cubic yards of kiln dust.

In 1993, several parties joined together to undertake what would become the largest reclamation in North America. In 1994, simultaneous explosions demolished the cement plant smokestacks. Eight months later, the barrier between Bay Harbor and Little Traverse Bay was removed, and water rushed in at the rate of 1,000,000 US gal/min (63 m3/s). Within 24 hours, over 2.5 billion US gallons (9,500,000 m3) of water formed Bay Harbor Lake.

Bay Harbor's town center, the "Village at Bay Harbor", has boutiques and restaurants where the former cement plant once stood. The Village is the center of the community, featuring such public elements as a marina, public observation platform and walking trails. Nearly one mile of Michigan shoreline and 70 acres (280,000 m2) of prime land were donated as public parks by Bay Harbor Company and are connected by five miles of non-motorized public nature trails.

Bay Harbor has over 1,200 acres (4.9 km2), 25 neighborhoods and 5 miles (8 km) of Lake Michigan waterfront. Three nine-hole golf courses line the shoreline and woodlands and have been rated eighth in the nation by Golf Digest. 90 acres (360,000 m2) of sheltered harborage offers protection for 120 public boat docks and another 128 private "dockominiums". Bay Harbor is a four-season luxury resort community and has a world-class deep water harbor, the Olympic caliber Bay Harbor Equestrian Club, and the 27-hole Bay Harbor Golf Club, designed by Arthur Hills and hailed by Golf Digest as "The Pebble Beach of the Midwest."

Lodging in The Village

Bay Harbor has two hotels: one is The Bay Harbor Village Hotel, a botique property which overlooks the Marina and the Village. The other is the Inn at Bay Harbor. After undergoing a 2 million dollar renovation in June 2016, the Inn became a Marriott Autograph property, one of only 100 hotels in the world to be part of Marriott International’s Autograph Collection Hotels.

Bay Harbor holds a number of Village and Community Foundation http://www.bayharborfoundation.org/ events throughout the year. In June the Annual In-Water Boat Show takes place, as well as the Bay Harbor Community Foundation's Vintage Car and Boat Show. In July there are events on the 3rd and 4th, including a parade featuring GEM cars. Bay Harbor set a world record for the longest parade of GEM cars in the world in 2009 and held the record for 6 years. Bay Harbor is a fully integrated GEM car Community. Bay Harbor also holds a number of other annual events as listed on their [1].

All content from Kiddle encyclopedia articles (including the article images and facts) can be freely used under Attribution-ShareAlike license, unless stated otherwise. Cite this article:
Bay Harbor, Michigan Facts for Kids. Kiddle Encyclopedia.