Little Traverse Bay is a small bay, 170 feet (55 m) deep, off Lake Michigan in the northern area of the Lower Peninsula of Michigan. The cities of Harbor Springs and Petoskey are located on this bay. 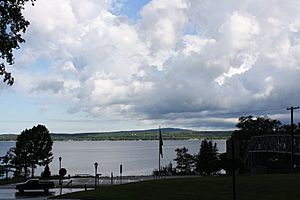 Harbor Springs originated as L'arbre de Croche, a French Jesuit mission village to serve the Odawa people bands in the area. After the British took over the territory, the village was renamed in English. The federally recognized Little Traverse Bay Bands of Odawa Indians have their headquarters here. They have land here, and additional land and a gaming casino in Petoskey.

The Little Traverse Light marks the entrance at Harbor Springs to the smaller harbor within the bay.

After the Odawa bands in northern Michigan were persuaded to cede considerable lands to the United States, the Little Traverse Bay region was developed by Illinois land developers and resort founders, such as lawyers Henry Stryker, III and Henry Brigham McClure, and the Capps family of Jacksonville, Illinois and woolen mills fame. The Stryker, Capps, and McClure families were interconnected with the Jacob Bunn industrial dynasty of Chicago and Springfield, Illinois.

The bay has also been used as a refuge by Great Lakes freighters during severe weather.

The bay has significant publicly accessible parkland on the waterfront, including in the cities of Petoskey and Harbor Springs, and in Petoskey State Park.

The bay is the location of the annual Ugotta Regatta, hosted by the Little Traverse Yacht Club in Harbor Springs. Participants are often boat owners and crews who have sailed in the Chicago Yacht Club Race to Mackinac and Port Huron to Mackinac Boat Race, each held on one of the two weekends before.

All content from Kiddle encyclopedia articles (including the article images and facts) can be freely used under Attribution-ShareAlike license, unless stated otherwise. Cite this article:
Little Traverse Bay Facts for Kids. Kiddle Encyclopedia.