Harbor Springs is a city and resort community in Emmet County, Michigan. The population was 1,194 in the 2010 census.

Harbor Springs is in a sheltered bay on the north shore of the Little Traverse Bay on Lake Michigan. The Little Traverse Lighthouse is a historic lighthouse on the Harbor Point peninsula, which shelters the deepest natural harbor on the Great Lakes. M-119 connects with US 31 7 miles (11 km) east and south at Bay View and Petoskey, which is 4 miles (6.4 km) away on the south side of the harbor.

The area is known for its historic summer resorts, such as Wequetonsing, which was founded by Illinois businessmen and lawyers Henry Stryker III, and Henry Brigham McClure. They were both connected with the Jacob Bunn industrial dynasty of Illinois.

The European-American settlement started with a mission by French Catholic Jesuits; they called this area L'Arbre Croche, meaning Crooked Tree. In 1847, L'Arbre Croche had the largest concentration of Native Americans in Michigan. French traders renamed the area Petit Traverse, or Little Traverse, when they arrived in the area. After more settlers came to the area from the eastern United States, they changed the name of the village to Harbor Springs, incorporating it in 1880.

The federally recognized Little Traverse Bay Bands of Odawa Indians are descendants of the numerous Odawa bands that historically occupied this area. They have their tribal offices in Harbor Springs, and a gaming resort in Petoskey. Their reservation lands encompasses approximately 336 square miles (870 km2) of land in Charlevoix and Emmet counties. 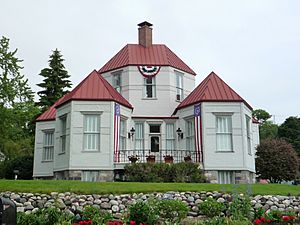 One of the city's more prominent European-American residents was Ephraim Shay (1839–1916), known for his invention of the Shay locomotive. The hexagonal-shaped house he built in downtown Harbor Springs still stands today and is listed on the National Register of Historic Places. The local elementary school is named after him.

Another building of interest is the Douglas House on the shore of Lake Michigan. Designed by noted architect Richard Meier and completed in 1973, this house is one of 150 structures listed in 2007 as America's Favorite Architecture by the American Institute of Architects.

Harbor Springs was the location of the Club Ponytail, a famous music hall destroyed by fire in 1969.

According to the United States Census Bureau, the city has a total area of 1.30 square miles (3.37 km2), all of it land. Harbor Springs has a lot to offer during the summer months, including beaches, sailing schools, marinas, multiple golf courses, bike paths, hiking trails, ice cream shops, candy stores, coffee shops and various summer vacation communities. In the winter months the two ski resorts Nub's Nob and Boyne Highlands offer over 678 acres of skiable terrain as well as terrain parks and various trails for snow shoeing & cross-country skiing. When Little Traverse Bay freezes over in the winter months, many people venture out on the ice for ice fishing and ice boating.

Harbor Springs is a few miles from neighboring Petoskey, Michigan, on the other side of the bay. It offers a wider variety of activities, including a multiplex movie theater, a thriving downtown area of its own, and several big-box stores.

The climate is described as Humid Continental by the Köppen Climate System, abbreviated as Dfb.

There were 558 households, of which 19.4% included children under the age of 18, 38.4% were married couples living together, 10.0% had a female householder with no husband present, 4.3% had a male householder with no wife present, and 47.3% were non-families. 43.7% of all households were made up of individuals, and 23.1% had someone living alone who was 65 years of age or older. The average household size was 1.93 and the average family size was 2.66. 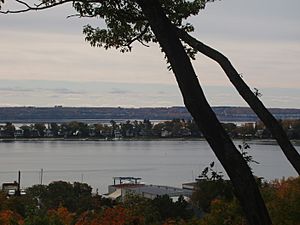 Panorama from the bluff overlooking the city

All content from Kiddle encyclopedia articles (including the article images and facts) can be freely used under Attribution-ShareAlike license, unless stated otherwise. Cite this article:
Harbor Springs, Michigan Facts for Kids. Kiddle Encyclopedia.