Bay of Fires facts for kids 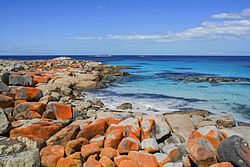 The Bay of Fires is a bay on the northeastern coast of Tasmania in Australia, extending from Binalong Bay to Eddystone Point. The bay was given its name in 1773 by Captain Tobias Furneaux in Adventure, who saw the fires of Aboriginal people on the beaches.

Bay whaling activities were carried out in the area in the 1840s.

The Bay of Fires is a region of white beaches, blue water and orange-hued granite (the colour of which is actually produced by a lichen). The northern section of the bay is part of Mount William National Park; the southern end is a conservation area.

A wide range of activities can be pursued in the Bay of Fires area, including camping, beach activities, boating, bird watching, fishing, swimming, surfing and walking.

All content from Kiddle encyclopedia articles (including the article images and facts) can be freely used under Attribution-ShareAlike license, unless stated otherwise. Cite this article:
Bay of Fires Facts for Kids. Kiddle Encyclopedia.