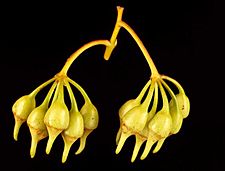 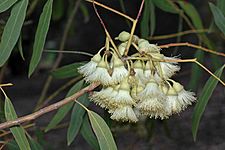 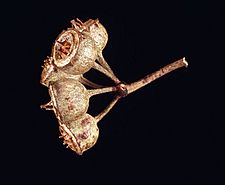 Eucalyptus beardiana was first formally described in 1978 by Ian Brooker and Donald Blaxell who published the description in the journal Nuytsia from a specimen collected near Shark Bay. The specific epithet (beardiana) honours John Stanley Beard. The authors considered it appropriate that "his long association with the botany of Western Australia should be perpetuated by a species endemic to the state".

Beard's mallee grows in tree heath, tall open shrubland in association with species including Yuna mallee, mallalie, Eucalyptus gittinsii, sceptre banksia, Ashby's banksia, broom honey-myrtle as well as other species of Acacia, Grevillea and Persoonia. It is found on sandplain between the Murchison River and Shark Bay.

Eucalyptus beardiana is classified as "endangered" under the Australian Government Environment Protection and Biodiversity Conservation Act 1999 and as "Threatened Flora (Declared Rare Flora — Extant)" by the Department of Environment and Conservation (Western Australia). The main threat to the species is habitat disturbance due to firebreak and track maintenance and by grazing animals and weed invasion.

All content from Kiddle encyclopedia articles (including the article images and facts) can be freely used under Attribution-ShareAlike license, unless stated otherwise. Cite this article:
Beard's mallee Facts for Kids. Kiddle Encyclopedia.