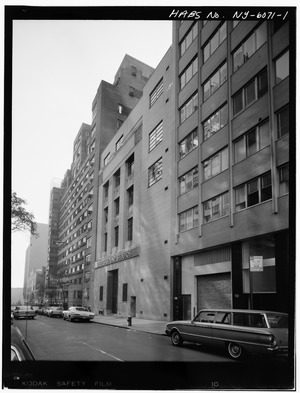 The Beaux-Arts Institute of Design (BAID, later the National Institute for Architectural Education) was an art and architectural school at 304 East 44th Street in Turtle Bay, Manhattan, in New York City. It was founded in 1916 by Lloyd Warren for the training of American architects, sculptors and mural painters consistent with the educational agenda of the French École des Beaux-Arts.

According to John Harbeson, the institute's values included:

As of 2008 the building, built in 1928, now houses the Permanent Mission of the Arab Republic of Egypt to the United Nations.

BAID grew out of the Society of Beaux-Arts Architects, a formal club of American architects who had attended the Parisian school.

From its beginning in 1894, the Society of Beaux-Arts Architects had been interested in improving architectural education in the U.S.. It took on the task of developing standard architectural "programmes" for design problems to be given as assignments in architecture schools and in independent ateliers. The intent was to raise performance standards, but the effect also was to standardize the way architecture was taught all across the United States. By 1900, most American architecture schools and many independent ateliers were participating. By 1916 the burden of providing problem statements and jurying the work from an increasing number of schools and ateliers exceeded the capacity of the Society, so it established BAID to carry on this work.

Among sculpture professionals, the foundation of BAID ensured a supply of competent decorative sculptors, and allowed the members of the National Sculpture Society to position themselves as fine artists in comparison.

Architect Frederic Charles Hirons of Dennison & Hirons was central to the founding and running of the school. Hirons had attended the Paris school from 1904 through 1909; co-founded BAID in 1916; designed the BAID building in 1928 (won through a competition, in the manner of Beaux-Arts); and served as president of the Society of Beaux-Arts Architects from 1937 through 1939.

Another founder was Lloyd Warren, the brother of Whitney Warren of Warren and Wetmore. He was instrumental in getting top figures from the sculptural and architectural fields to teach at BAID, and serve on competition panels, for the sake of the profession.

In 1927 the first winner of the annual Whitney Warren architectural competition was Carl Conrad Franz Kressbach, a student at the Graduate School of Architecture at Harvard University (graduate of University of Michigan). His design "An airport for a large city" drew interest among persons concerned with the future of commercial aviation, it depicted a scheme for dispatching and receiving commercial planes.

In 1956 the Institute changed its name to the National Institute for Architectural Education, reflecting a change of focus away from European traditions. In 1995 it was again renamed the Van Alen Institute.

BAID architectural competitions were published across the country, administered through university architecture schools or independent studios, and the entries all graded by jury at once. The highest number of entries received was in the 1929–1930 year, when 9500 entries came into New York City for judging.

BAID also had on-site instruction and classrooms, with large sculpture studios open long hours and into the evenings for the convenience of working students and part-time teachers.

The school tended to be populated by students who were either immigrants or first-generation Americans. They often came from working-class backgrounds, and their training was towards getting a union job in the building trades, rather than becoming a fine arts sculptor. Many of these students also attended the Art Students League of New York.

All content from Kiddle encyclopedia articles (including the article images and facts) can be freely used under Attribution-ShareAlike license, unless stated otherwise. Cite this article:
Beaux-Arts Institute of Design Facts for Kids. Kiddle Encyclopedia.