Beebe Windmill is a historic mill located at the southeast corner of Ocean Road and Hildreth Avenue in Bridgehampton, New York.

Beebe windmill was built in 1820 at Sag Harbor for Lester Beebe. After his death, it was bought by Rose Gelston who had it moved to Bridgehampton where it worked for more than 50 years. In 1882, it was bought by James Sanford and moved to a site south of the railroad. Later, a steam engine was installed to provide power when the wind was not blowing. In 1888, the mill was repaired by millwright Nathaniel Dominy of Long Island. It was moved to a site north of the railroad in 1889. It was operated here until 1915 by the Bridgehampton Milling Company. In that year, it was bought by John E. Berwind and moved to his summer estate, Minden. 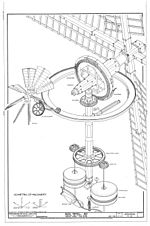 The machinery of Beebe windmill, in HAER drawing

Beebe windmill is a four-story smock mill with an ogee cap winded by a fantail. Four Common sails are carried on a wooden windshaft, as is the wooden clasp arm brake wheel. This drives a cast iron wallower carried at the top of the upright shaft. At its lower end the cast iron great spur wheel drives two pairs of overdrift millstones. 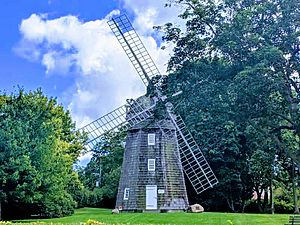 All content from Kiddle encyclopedia articles (including the article images and facts) can be freely used under Attribution-ShareAlike license, unless stated otherwise. Cite this article:
Beebe Windmill Facts for Kids. Kiddle Encyclopedia.