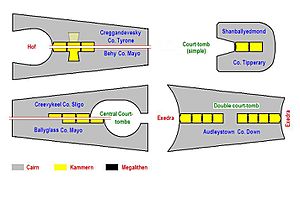 Various forms of court tombs. The form of the court tomb of Behy is pictured on the top left.

The court tomb of Behy is a megalithic monument in the townland of the same name (Irish: An Bheithigh, meaning birch land), near Belderrig in the north of County Mayo, Ireland. The tomb was partly excavated in the 1960s but the excavated part has since been largely covered up again with peat.

Court tombs are considered to be a specific type of chamber tomb found principally in Scotland and Ireland. More than 400 examples are known in Ulster, Connacht, and the southwest of Scotland. The cruciform main chamber and the antechamber of the court tomb of Behy are very large. Above the 2 meter high chamber lie two capstones. The floor in the side chambers is paved.

Behy is an unusual court tomb with features not typically found in monuments of this class. The two side-chambered transepted gallery resembles the cruciform chamber of a passage grave. The court tomb of Behy lies near a contemporary settlement and in the middle of the Céide Fields, which is atypical for a megalithic site.

The drywall material, which borders the obliquely set court at the entrance to the tomb, is unusual as in typical court tombs this role is taken by orthostats. It is possible that other court tombs once had drywall masonry, but as this is easier to remove than heavy orthostats it has been lost while the courtyard orthostats have survived.

All content from Kiddle encyclopedia articles (including the article images and facts) can be freely used under Attribution-ShareAlike license, unless stated otherwise. Cite this article:
Behy court tomb Facts for Kids. Kiddle Encyclopedia.