The Belasco Theatre is a Broadway theater which opened in 1907 at 111 West 44th Street in Midtown Manhattan, New York City. Originally known as the Stuyvesant Theatre, it was designed by architect George Keister for impresario David Belasco. The interior featured Tiffany lighting and ceiling panels, rich woodwork and expansive murals by American artist Everett Shinn, and a ten-room duplex penthouse apartment that Belasco utilized as combination living quarters/office space. 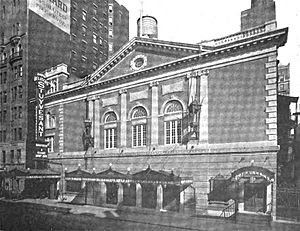 The theater opened as the Stuyvesant Theatre on October 16, 1907, with the musical A Grand Army Man with Antoinette Perry. The theater was outfitted with the most advanced stagecraft tools available including extensive lighting rigs, a hydraulics system, and vast wing and fly space. Like the neighboring Lyceum Theater, it was built with ample workshop space as well underneath the stage. Meyer R. Bimberg was involved in the theater's construction.

In 1910, Belasco attached his own name to the venue. After his death in 1931, Katharine Cornell and then playwright Elmer Rice leased the space. Marlon Brando had his first widely noticed success in this theater, in a production of Maxwell Anderson's Truckline Cafe, which opened on February 27, 1946. He played the small but crucial role of Sage MacRae. The play flopped, but the press celebrated Brando as a new genius actor.

The Shuberts bought the theater in 1949 and leased it to NBC for three years before returning it to legitimate use. In 2014, Hedwig and the Angry Inch opened its first Broadway production, which was the longest running show at the Belasco and features a joke about a fictional show that opened at the Belasco called Hurt Locker: The Musical. From November 1 to December 1, 2019, Martin Scorsese's The Irishman screened at the theater, making it the first film screening ever in the Belasco's 112-year history.

This theater is the subject of an urban legend that David Belasco's ghost haunts the theater every night. Some performers in the shows that played there have even claimed to have spotted him or other ghosts during performances. It was also reported that after Oh! Calcutta! played at the theater, the ghost of David Belasco stopped appearing. In Hedwig and the Angry Inch, Hedwig briefly discusses the history of the Belasco and references the ghost of Belasco, claiming that if the ghost appears on a show's opening night then the show is blessed. She then asks audience members in one of the boxes to tell her if the ghost appears.

All content from Kiddle encyclopedia articles (including the article images and facts) can be freely used under Attribution-ShareAlike license, unless stated otherwise. Cite this article:
Belasco Theatre Facts for Kids. Kiddle Encyclopedia.