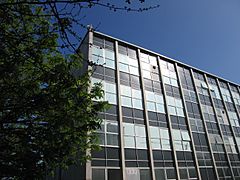 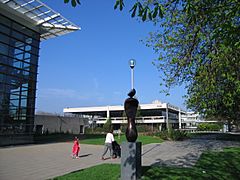 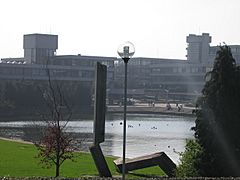 The Arts Block and Admin

Belfield is a small enclave, not quite a suburb, in Dún Laoghaire–Rathdown, Ireland. It is synonymous with the main campus of University College Dublin.

Belfield is close to Donnybrook, Ballsbridge, Clonskeagh, Goatstown and Stillorgan and takes its name from Belfield House and Demesne, one of eight properties bought to form the main campus of University College Dublin. It is adjacent to the N11 road.

Belfield was one of the original sites suggested as a possible location for Dublin Airport before Collinstown was chosen. Nowadays, Belfield is synonymous with University College Dublin, being the location of that institution's main 132 hectare campus. University College Dublin (UCD) dates back to its foundation at 86 St. Stephen's Green in 1851 as the Catholic University of Ireland founded by John Henry Newman who was its first rector.

In 1934, UCD bought Belfield House and from 1949 to 1958 purchased a group of adjoining properties to form a potential campus estate.

In 1960, the Government recommended that the College move from the city centre to Belfield. The first buildings to be completed on the new campus were those of the Faculty of Science in 1964. The other faculties moved to Belfield on a phased basis as their new buildings were completed, although as of 2007, parts of a few remain in Dublin city centre. Additionally, the Michael Smurfit Graduate School of Business is based on the remainder of the Carysfort (former School of Education) campus in Blackrock.

The site also includes Belfield office park, with a large, international Hewlett-Packard call centre, and a sports ground, The Belfield Bowl, at which the UCD soccer and rugby teams both play in the top divisions of their respective leagues. The area is served by the colleges numerous media outlets including newspapers, The College Tribune and the The University Observer, radio station Belfield FM and television station the College Television Network.

There are several office parks located in Bellfield: The Belfield Office Park, Beech Hill OP, Clonskeagh Drive. Some of the major companies located here are:

All content from Kiddle encyclopedia articles (including the article images and facts) can be freely used under Attribution-ShareAlike license, unless stated otherwise. Cite this article:
Belfield, Dublin Facts for Kids. Kiddle Encyclopedia.