Belgrave is a suburb in Melbourne, Victoria, Australia, 35 km east of Melbourne's central business district. Its local government area is the Shire of Yarra Ranges. At the 2006 Census, Belgrave had a population of 4094, and the suburb is only 16 years younger than the Melbourne CBD.

Belgrave was first settled in 1851.

Belgrave was named after an 1840s chapel in Leeds, Yorkshire, England; the name was carried by Mr and Mrs R.G. Benson when they came to Melbourne in 1856. Their sons, the Benson Brothers, settled in the Belgrave district in the 1870s. Though originally the area was known as "Monbulk" for the reservoir that lay near by, the town wasn't known as Belgrave until around 1903, and another suggested name for the town at that stage was Glassford. A Post Office opened in the area around 1904. Many men from Belgrave went to the two world wars, and there is a war memorial in Belgrave.

Most of the commercial district of Belgrave is located on Main Street, which is at the end of Burwood Highway. There are also shops on Bayview Road, which is located just across the rail bridge. Belgrave has galleries and bookshops. There is an organic and fair trade emphasis amongst some businesses including Belgrave Organics, a number of cafés serving fairtrade coffee (Earthly Pleasures Organic Café, The Laughing Owl, Grunge Café, The Village Idiot, Bensons and Reel Café). There are two retro clothing stores (Walk in Wardrobe and The Silver Compac). There is a Woolworths supermarket, three hairdressing salons, two travel agencies, a building design (drafting) service, a pharmacy, a butcher, a dry cleaner, two bakeries, a patisserie, a newsagency, a cinema, a few fast food outlets, restaurants, a Centrelink office, a pub and a few bars/lounges, two banks (the Commonwealth Bank and the Bendigo Bank), a tattoo studio, as well as a public library. It also has a very active Traders Association. 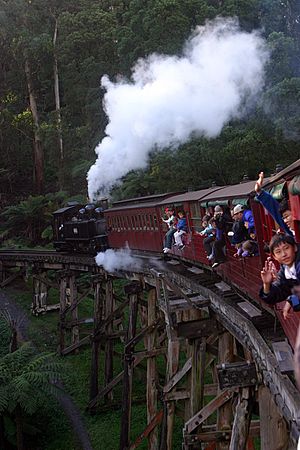 Locomotive 12A on the famous Monbulk Creek trestle bridge near Belgrave. 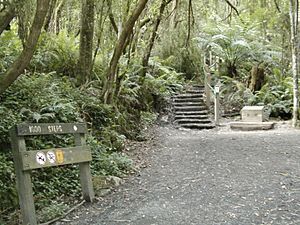 Belgrave's most notable attraction is the heritage narrow gauge, steam-operated Puffing Billy Railway, which was reopened in 1962—after four years of restoration by volunteers—and travels through 24 kilometres of cool temperate rainforest, semi-urban development and rural farmland to Gembrook. It is also the terminus of the Belgrave Suburban Electric Railway Line.

Other nearby attractions include The 1000 Steps, Sherbrooke Forest and Sherbrooke Falls in the Dandenong Ranges National Park.

Belgrave has a park 3 km from the Main Street.

The Cameo Cinema has eight cinemas, with Cinema 1 dating to the 1930s. There is an outdoor Cinema at the rear of the building, which is open only during the summer months (December to March). There is a music scene with live acts taking place at Sooki Lounge, Gin Lane and Bell Tavern. There is a recording studio. The historic property known as Glen Harrow Gardens has been featured on travel television programs. During the summer months Belgrave Pool is open. Belgrave pool is an outdoor 33m heated pool.

There is a Centrelink office on the high side of Main Street. The State Member for the seat of Monbulk, James Merlino MLA, has his Electoral Office in Belgrave. The closest Shire of Yarra Ranges office is in Upwey on Main Street.

The Belgrave Town Park, just below the police station, provides a fine view over the town as well as a public space for events such as the annual Christmas carols. Just off the Belgrave-Hallam Road is the Belgrave outdoor swimming pool, tennis courts and a playground.

The town supports both a cricket and Australian Rules football team which are located at Belgrave Recreation Reserve on Reserve Road. It is also the home ground of the Belgrave Junior Football Club. The Belgrave Cricket Club is affiliated with the Ferntree Gully And District Cricket Association, while the Belgrave Football Club competes in the Yarra Valley Mountain Football League.

Belgrave railway station is located behind the main street shops, with the steam train Puffing Billy just beyond it. Belgrave suburban electric trains go to Melbourne via Ringwood. Puffing Billy goes to Gembrook.

A small reserve surrounding Belgrave Lake and located south of Belgrave town centre. It is an important biolink between Dandenong Ranges National Park and Birdsland as well as Lysterfield Lake Park. The park has a combined focus of recreation and conservation. Monbulk creek flows through the area and is important for wildlife such as platypus and water rat. In the trees, arboreal mammals include the sugar glider and also would have been a habitat for the yellow-bellied glider. The reserve is dominated by Eucalyptus cypellocarpa (mountain grey gum) on the slopes. Along the riparian zone (adjacent to creek) the dominant plant species are Eucalyptus viminalis subsp. viminalis (manna gum), Acacia dealbata (silver wattle).

All content from Kiddle encyclopedia articles (including the article images and facts) can be freely used under Attribution-ShareAlike license, unless stated otherwise. Cite this article:
Belgrave, Victoria Facts for Kids. Kiddle Encyclopedia.