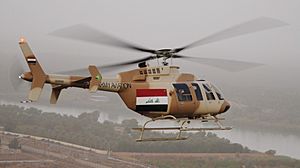 The Bell 407 is a is a light helicopter. It was designed and built in the United States by Bell Helicopters from the famous model 206. It was originally designed for civilian purposes. The Bell 407 is often used for transport, as an air ambulance, for law enforcement, news gathering, and movie making. It was changed to be used by the military including the US Army as OH-58D Kiowa Warrior.

All content from Kiddle encyclopedia articles (including the article images and facts) can be freely used under Attribution-ShareAlike license, unless stated otherwise. Cite this article:
Bell 407 Facts for Kids. Kiddle Encyclopedia.