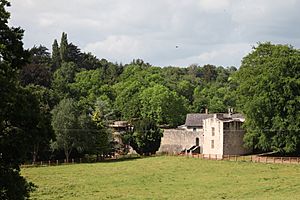 Benburb Castle is a castle situated in Benburb, County Tyrone, Northern Ireland. It is a plantation bawn built in 1611 by Sir Richard Wingfield, on the site of an O'Neill strong point on a bend in the Blackwater River thought to have been constructed as early as the 15th century. It is an irregular four-sided bawn with the entrance in the north wall. There are large rectangular flanking towers at the north-east and north-west corners and a smaller round tower at the south-east corner It is built on a limestone cliff overlooking the River Blackwater, the border between County Tyrone and County Armagh. A 19th-century tower house occupies the south west area of the bawn. The castle is in excellent condition having been recently restored and stands in the grounds of the imposing Servite Priory, a religious order based in the village.

Benburb or Wingfield's Castle is a State Care Historic Monument in the townland of Benburb, in Dungannon and South Tyrone Borough Council area, at grid ref: H8146 5199.

All content from Kiddle encyclopedia articles (including the article images and facts) can be freely used under Attribution-ShareAlike license, unless stated otherwise. Cite this article:
Benburb Castle Facts for Kids. Kiddle Encyclopedia.