Beneduce Vineyards ( BEN-ə-DOO-chee) is a winery in the Pittstown section of Alexandria Township in Hunterdon County, New Jersey, United States. A family farm since 2000, the vineyard was first planted in 2009, and opened to the public in 2012. Beneduce has 10 acres of grapes under cultivation, and produces 4,000 cases of wine per year. The winery is named after the family that owns it.

Beneduce Vineyards primarily grows and produces wine from aromatic varietals, including Blaufränkisch (Lemberger), Cabernet Franc, Cabernet Sauvignon, Chambourcin, Chardonnay, Corot noir, Gewürztraminer, Malbec, Noiret, Pinot noir, Riesling, and Syrah. It is the only winery in New Jersey that produces wine from Noiret, which is a red hybrid grape developed in New York in 1973. Beneduce is not located in one of New Jersey's three viticultural areas. 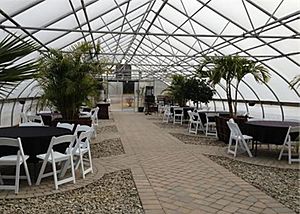 Formerly used for growing plants for a garden center, this greenhouse is now used for hosting special events.

Beneduce has a plenary winery license from the New Jersey Division of Alcoholic Beverage Control, which allows it to produce an unrestricted amount of wine, operate up to 15 off-premises sales rooms, and ship up to 12 cases per year to consumers in-state or out-of-state. The winery is a member of the Garden State Wine Growers Association and its subsidiary, Vintage North Jersey.

All content from Kiddle encyclopedia articles (including the article images and facts) can be freely used under Attribution-ShareAlike license, unless stated otherwise. Cite this article:
Beneduce Vineyards Facts for Kids. Kiddle Encyclopedia.