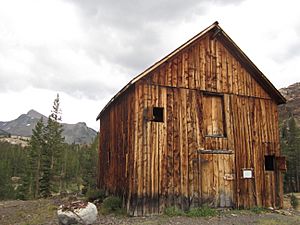 The restored Bennettville bunkhouse in 2014

Bennettville (originally, Bennett City and Tioga) is a former settlement and ghost town in Mono County, California. It was located on Mine Creek 4 mi (6.4 km) east-southeast of Mount Conness.

Mining began at the place in 1860. The first mine was renamed Tioga, when the Great Sierra Consolidated Mining Company bought it. By 1878, there were many mines in the Tioga district. The mining remnants form part of the Great Sierra Mine Historic Site.

The remnants of Bennettville consist of two commemorative plaques and two buildings on a hilltop, an assay office and a bunkhouse both of which were restored in 1993.

All content from Kiddle encyclopedia articles (including the article images and facts) can be freely used under Attribution-ShareAlike license, unless stated otherwise. Cite this article:
Bennettville, California Facts for Kids. Kiddle Encyclopedia.