Mount Conness is a 12,590 foot (3,840 m) mountain in the Sierra Nevada range, to the west of the Hall Natural Area. Conness is on the boundary between the Inyo National Forest and Yosemite National Park. The Conness Glacier lies north of the summit.

The west face of Mt. Conness near the peak overlooking Yosemite Valley.

"Mount Conness bears the name of a distinguished citizen of California, now a United States Senator, who deserves more than any other person, the credit of carrying the bill, organizing the Geological Survey of California, through the Legislature, and who is chiefly to be credited for another great scientific work, the Survey of the 40th Parallel."

Clarence King, a geologist for the Survey and the first to ascend Mount Conness along with James T. Gardiner in 1864, wrote:

"I recognized the old familiar summit... and that firm peak with titan strength and brow so square and solid, it seems altogether natural we should have named it for California’s statesman, John Conness."

The members of the Whitney Survey were naturally[original research?] appreciative of Senator Conness for helping their cause. 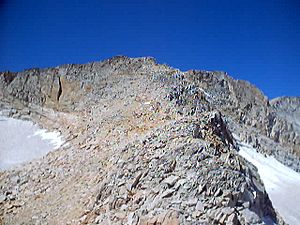 Conness is a training ground for alpine climbing since it utilizes all aspects of mountaineering: trails, scrambling, and glacier trekking; all at a high altitude for California. Usually climbers camp near Tioga Pass and begin the climb at dawn. It takes about a full day to summit.

The summit block consists of class 2 scrambling along a knife edge ridge leading to the summit consisting of views to the east of the Conness Glacier and to the west toward Tuolumne Meadows.

All content from Kiddle encyclopedia articles (including the article images and facts) can be freely used under Attribution-ShareAlike license, unless stated otherwise. Cite this article:
Mount Conness Facts for Kids. Kiddle Encyclopedia.