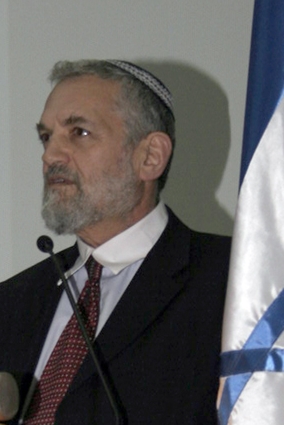 Binyamin "Benny" Elon (Hebrew: בנימין אלון, November 10, 1954 in Jerusalem – May 5, 2017 in Jerusalem) was an Israeli Orthodox rabbi and politician.

Elon served as a Member of Knesset for Moledet and the National Union between 1996 and 2009. From 2001 through 2002 and again from 2003 to 2004, Elon served as Israel's Minister of Tourism in the First and Second Sharon cabinet.

Elon lived in Beit El, an Israeli settlement in the West Bank, for twenty years. He was married to author and journalist Emuna Elon. They have six children.

His father, Menachem Elon, was the former Deputy Chief Justice of Israel. His brother, Rabbi Mordechai Elon, is a well-known and controversial figure in the Religious Zionist Movement.

In February 2006, Elon was diagnosed with throat cancer. He was treated but it was never cured, and he was forced retire due to health problems because of it in 2008. After eleven years, he died from the condition at the age of 62.

All content from Kiddle encyclopedia articles (including the article images and facts) can be freely used under Attribution-ShareAlike license, unless stated otherwise. Cite this article:
Benny Elon Facts for Kids. Kiddle Encyclopedia.