Bentonia is a town in Yazoo County, Mississippi. The population was 500 at the 2000 census. Some blues scholars maintain that there is a "Bentonia School" of blues singing and guitar-playing, and that "Bentonia-style" is a distinct style of delta blues, though Bentonia lies outside the Mississippi Delta proper. 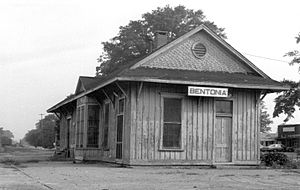 Bentonia began as a postal town along the Illinois Central Railway. It is named for an early resident. Bentonia had a population of 167 in 1900.

The "Bentonia School," "Bentonia-style" or "Bentonia Blues" is more accurately described as the unique, haunting, country blues style that originated in and immediately around the small town of Bentonia. The annual Bentonia Blues Festival is held the third Saturday of June in downtown Bentonia. The festival's Blues Stage is always set up in front of the world-famous Blue Front Cafe [sic erat scriptum], which is still operated by proprietor Jimmy "Duck" Holmes who, as a young man, largely learned the local style from Bentonia Blues master Jack Owens.

Bentonia was the hometown of Henry Stuckey, founder of the Bentonia style of Blues, and his two famous students, Skip James and Jack Owens. Bentonia is also home of the historic Blue Front Café where owner Jimmy “Duck” Holmes keeps it authentic, especially when he breaks out his guitar for an impromptu performance.

The Blue Front Café in Bentonia and native sons Skip James and Jack Owens have received historical markers by The Mississippi Blues Commission commemorating their importance in the history of the development of the blues in Mississippi. These markers are located in front of the Blue Front Café in downtown Bentonia, at the southeastern corner of the intersection of U.S. Route 49 and Mississippi Highway 433 West (…one block west of Bentonia Gas and Food, formerly Osborne's Grocery, which locals called "Poochie's." Clarence "Poochie" Osborne still runs the adjoining tire shop, Osborne's Tire Repair, and a stop there to chew the fat with Poochie and/or his top tire man, Samuel "Sammie" Bassett is as unique an experience as a visit with Jimmy "Duck" Holmes at the historic Blue Front Café.), and at the intersection of Mississippi Highway 433 South and Rose Hill Road (just east of the Pleasant Grove Baptist Church), respectively. The three markers are officially on the Mississippi Blues Trail.

According to the United States Census Bureau, the town has a total area of 1.4 square miles (3.6 km2), all land.

There were 203 households out of which 29.6% had children under the age of 18 living with them, 38.9% were married couples living together, 21.7% had a female householder with no husband present, and 35.5% were non-families. 33.5% of all households were made up of individuals and 16.3% had someone living alone who was 65 years of age or older. The average household size was 2.46 and the average family size was 3.15.

All content from Kiddle encyclopedia articles (including the article images and facts) can be freely used under Attribution-ShareAlike license, unless stated otherwise. Cite this article:
Bentonia, Mississippi Facts for Kids. Kiddle Encyclopedia.