Yazoo City is a city in Yazoo County, Mississippi, United States. It was named after the Yazoo River, which, in turn was named by the French explorer Robert La Salle in 1682 as "Rivière des Yazous" in reference to the Yazoo tribe living near the river's mouth. It is the county seat of Yazoo County and the principal city of the Yazoo City Micropolitan Statistical Area, which is part of the larger Jackson–Yazoo City Combined Statistical Area. According to the 2010 census, the population was 11,403.

U.S. Route 49W provides a fairly direct link between Yazoo City and Belzoni. The old highway segment, renamed Mississippi Highway 149, passes through Panther Swamp National Wildlife Refuge and the communities of Louise and Midnight before reconnecting with the new US 49W at Silver City, 7 mi south of Belzoni. The new highway makes the town of Carter so near, it might be considered for annexation by Yazoo City. Two bridges now cross the Yazoo River at Yazoo City.

The section of MS 3 in Yazoo City is called Haley Barbour Parkway. Barbour, the former governor of Mississippi, grew up in Yazoo City and has a home on Wolf Lake, a lake north of Yazoo City. U.S. Route 49 (part of which was formerly U.S. 49E) through Yazoo City is named Jerry Clower Boulevard, after the famous comedian, a former resident of Yazoo City. 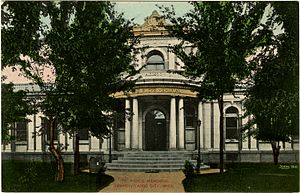 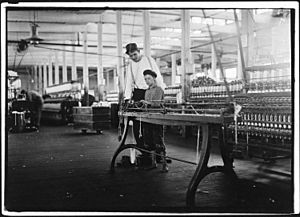 The community now known as Yazoo City was founded in 1824 with the name Hannan's Bluff. It was later renamed Manchester, then changed to Yazoo City in 1841. Yazoo City became the county seat in 1849.

Yazoo City was rebuilt, but yellow fever struck and took more victims in 1878. On May 25, 1904, a fire destroyed much of central Yazoo City. According to a local legend, the fire was caused by a witch avenging her death. In reality, a boy playing with matches accidentally set a house ablaze. The fire quickly spread, and three-fourths of the town was destroyed, including most of the homes. It was stopped by a canal, which saved the new courthouse (built in 1872 to replace the one burned by the Union forces) and 10 antebellum homes nearby. The town took almost two years to recover.

The Great Mississippi Flood of 1927 did much damage to the entire Delta, but Yazoo City was restored and is now protected by an effective flood-prevention system. 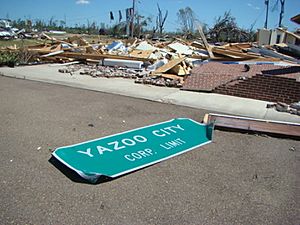 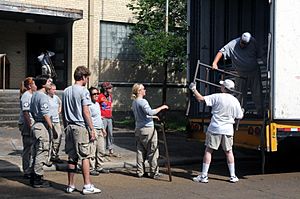 A strong tornado, rated EF4 on the Enhanced Fujita scale and with a path width of 1.75 mi, hit Yazoo County on April 24, 2010. Four people were killed in the Yazoo City area, and a number were seriously injured; four of the victims were airlifted to the University of Mississippi Medical Center in the capital city of Jackson, 40 mi away. The Governor of Mississippi, Haley Barbour, toured the area in a National Guard helicopter and held a news conference on the disaster at 3:30 pm. The tornado and the aftermath were shown in an episode of the Discovery Channel series Storm Chasers, and several videos YouTube show considerable detail and descriptions.

Yazoo County Airport is in unincorporated Yazoo County, 2 miles (3.2 km) west of central Yazoo City. Lynne W. Jeter of the Mississippi Business Journal said in 2001 that the county airport "may have played an important role in landing the multiphase federal prison project that is currently under expansion."

All content from Kiddle encyclopedia articles (including the article images and facts) can be freely used under Attribution-ShareAlike license, unless stated otherwise. Cite this article:
Yazoo City, Mississippi Facts for Kids. Kiddle Encyclopedia.