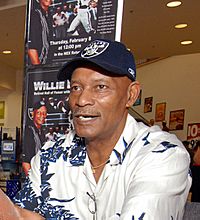 William Ferdie Brown (December 2, 1940 – October 21, 2019) was an American professional football player, coach, and executive. He played as a cornerback for the Denver Broncos and the Oakland Raiders in the National Football League (NFL).

Brown was the head football coach at California State University, Long Beach in 1991, the final season before the school's football program ended. Brown was added into the Pro Football Hall of Fame as a player in 1984. At the time of his death he was on the Raiders' administrative staff.

Brown was born in Yazoo City, Mississippi. He studied at Grambling State University. Brown died on October 21, 2019 at his home in Tracy, California at the age of 78.

All content from Kiddle encyclopedia articles (including the article images and facts) can be freely used under Attribution-ShareAlike license, unless stated otherwise. Cite this article:
Willie Brown (American football) Facts for Kids. Kiddle Encyclopedia.