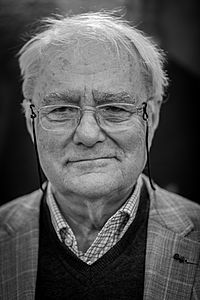 Bernard Vogler (30 April 1935 – 2 December 2020) was a French academic and historian. He was a professor at the University of Strasbourg. He was a specialist in the History of Alsace from the 15th to the 20th Centuries. Vogler was born in Obermodern-Zutzendorf, France.

Vogler was a member of the Comité des travaux historiques et scientifiques from 1989 to 2000 and was Vice-President of the International Commission for Comparative Ecclesiastical History from 1975 to 2001. He was President of the University of the Third Age from 2004 to 2008.

All content from Kiddle encyclopedia articles (including the article images and facts) can be freely used under Attribution-ShareAlike license, unless stated otherwise. Cite this article:
Bernard Vogler Facts for Kids. Kiddle Encyclopedia.