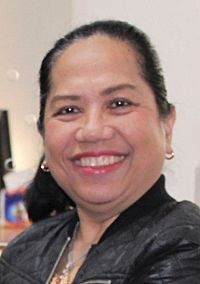 Bernardita "Bernie" Leonido Catalla (February 18, 1958 – April 2, 2020) was a Philippine career diplomat. She was last appointed as the Philippine ambassador to Lebanon in 2017. She was also assigned to Hong Kong, Indonesia, and Malaysia. She was born in Makati, Philippines. Catalla was principal assistant and then acting director of the ASEAN office from 1994 to 1995. She became the Director of the Office of United Nations and International Organizations from 2001 to 2002 and Passport Director from 2002 to 2005.

All content from Kiddle encyclopedia articles (including the article images and facts) can be freely used under Attribution-ShareAlike license, unless stated otherwise. Cite this article:
Bernardita Catalla Facts for Kids. Kiddle Encyclopedia.