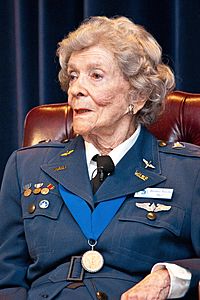 Bernice "Bee" Falk Haydu (born December 15, 1920) was an American aviator. She was a Women Airforce Service Pilot (WASP) in World War II. Haydu remained active in aviation and has been an activist for women pilots into her 90s. Haydu was born in Montclair, New Jersey.

From 1978 to 1980 she was president of Women Military Aviators. She was one of the three surviving WASPs present in the Oval Office in 2009, when Barack Obama awarded the Congressional Gold Medal to the WASPs for their service.

All content from Kiddle encyclopedia articles (including the article images and facts) can be freely used under Attribution-ShareAlike license, unless stated otherwise. Cite this article:
Bernice Falk Haydu Facts for Kids. Kiddle Encyclopedia.