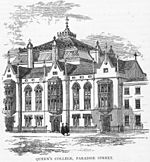 He was born at Mayfield Vicarage, in Staffordshire, where his father, the Reverend Samuel Allen Windle, a Church of England clergyman, was vicar. He attended Trinity College, where he graduated B.A. in 1879. He also served as Librarian of the University Philosophical Society in the 1877–78 session.

During his medical training days, Windle was an atheist. He later converted to Catholicism. He was a critic of Darwinism and took influence from St. George Jackson Mivart. Historian David N. Livingstone has noted that Windle favoured a Catholic version of neo-Lamarckism.

Windle was a vitalist. Historian Peter J. Bowler has written that Windle was "one of the few biologists to defend an outright vitalism."

Windle was elected a Fellow of the Royal Society in 1899. In 1909, he was made a knight of St. Gregory the Great by Pius X. In 1912, he was made a Knight Bachelor and therefore granted the title sir. He was knighted by King George V during a ceremony at Buckingham Palace on 6 March 1912.

All content from Kiddle encyclopedia articles (including the article images and facts) can be freely used under Attribution-ShareAlike license, unless stated otherwise. Cite this article:
Bertram Windle Facts for Kids. Kiddle Encyclopedia.