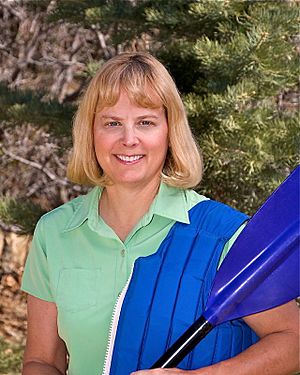 Beth Groundwater is an American author who has written two novels in the Claire Hanover gift basket designer mystery series, A Real Basket Case and To Hell in a Handbasket. The first, published in March, 2007, was put up for the Best First Novel Agatha Award in 2007. The sequel, To Hell in a Handbasket was published in May, 2009. She writes in the Mystery genre, and has also written several short stories.

Groundwater first began writing fiction in the fifth grade, and in high school took an outside study in English. She went to the College of William and Mary and got a degree in Psychology and Computer Science in 1978. She worked in another job until 1999, then she chose to become a writer.

After going to a few writers' meetings, she began writing short stories. Seven were published before she met a literary agent who agreed to publish her first novel, A Real Basket Case. It was published in 2007, and was put up for the Best First Novel Agatha Award in 2007. Of her short stories, eight have been published and one was written in Farsi. Another of Groundwater's short stories has been made into a live play.

All content from Kiddle encyclopedia articles (including the article images and facts) can be freely used under Attribution-ShareAlike license, unless stated otherwise. Cite this article:
Beth Groundwater Facts for Kids. Kiddle Encyclopedia.