Kids Encyclopedia Facts
This page is about the entire genus Betta. For the species Betta splendens which is often called simply "betta", see Siamese fighting fish.

Betta is a large genus of small, often colorful, freshwater ray-finned fishes, known as "bettas", in the gourami family (Osphronemidae). The best known Betta species is B. splendens, commonly known as the Siamese fighting fish.

All the Betta species are small fishes, but they vary considerably in size, ranging from under 2.5 cm (1 in) total length in B. chanoides to 14 cm (5.5 in) in the Akar betta (B. akarensis).

Bettas are anabantoids, which means they can breathe atmospheric air using a unique organ called the labyrinth. This accounts for their ability to thrive in low-oxygen water conditions that would kill most other fish, such as rice paddies, slow-moving streams, drainage ditches, and large puddles.

The bettas exhibit two kinds of spawning behaviour: some build bubble nests, such as B. splendens, while others are mouthbrooders, such as B. picta. The mouthbrooding species are sometimes called "pseudo bettas", and are sometimes speculated to have evolved from the nest-builders in an adaptation to their fast-moving stream habitats.

A phylogenetic study published in 2004 concluded tentatively that bubble-nesting was the ancestral condition in Betta, and that mouthbrooding has evolved on more than one occasion in the history of the genus. However it was unable to establish a correlation with any of three habitat variables studied: whether a species was found in lowland or highland streams, whether it was found in peat swamp forests, and whether it was found in water with fast or slow currents. Mouthbrooding species tend to exhibit less sexual dimorphism, perhaps because they do not need to defend a territory as the bubble-nesters do.

Siamese fighting fish (B. splendens) are frequently sold in the United States simply as "bettas". In fact, as of 2017[update], around 73 species are classified within the genus Betta. A useful distinction is that while the generic name Betta is italicized and capitalized, when used as a common name it is usually neither italicized nor capitalized. The common name of B. pugnax, for example, is thus Penang betta.

Betta splendens, the Siamese fighting fish, is often referred to simply as a "betta" in the U.S.

The name Betta (or betta) is pronounced the first part is the same as the English word bet. The name is often pronounced in American English, and may be spelled with one 't'. The name of the genus is derived from the Malay word ikan betah ("persistent fish").

Wild Betta fish are hardy and eat almost any animal small enough for these small fish to consume, including worms, larvae of mosquitoes or other insects, and smaller fish. Their natural environment is often resource-limited, so many Betta species are generalist feeders.

While many Betta species are common and B. splendens is ubiquitous in the aquarium trade, other bettas are threatened. The IUCN Red List classifies several Betta species as Vulnerable. In addition, B. livida is Endangered, and B. miniopinna, B. persephone, and B. spilotogena are Critically Endangered.

The United Nations Environment Programme lists an unconfirmed species, Betta cf. tomi, as having become extinct in Singapore between 1970 and 1994. This likely refers to the extirpated Singaporean population of B. tomi, which continues to exist in the wild in Indonesia and Malaysia, as well as in captivity; the Red List classifies it as Vulnerable. 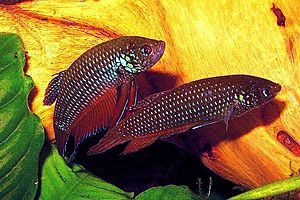 A pair of Betta smaragdina 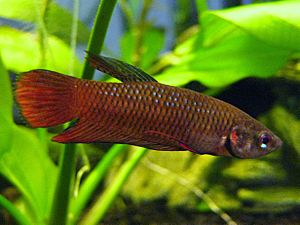 There are currently 75 recognized species in this genus. The currently described Betta species can be grouped into species complexes:

All content from Kiddle encyclopedia articles (including the article images and facts) can be freely used under Attribution-ShareAlike license, unless stated otherwise. Cite this article:
Betta Facts for Kids. Kiddle Encyclopedia.