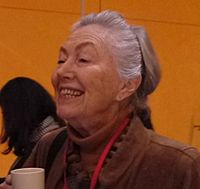 Betty Harper Fussell (born July 28, 1927) is an American writer and food historian. She as write many books about food history, recipes, and her memoir. She is also a critic and educator. Fussell worked with the New York Times, The New Yorker, and the Los Angeles Times. During her career, she won many awards and received many honors. In 2009, she was made a member of Who’s Who of Food & Beverage in America.

Fussell was born in Riverside, California. She was raised in both in California and in New York City. She studied at Pomona College, Radcliffe College, and Rutgers University. Fussell was married to American writer Paul Fussell from 1949 until they divorced in 1981. They have two children. She now lives in New York City.

All content from Kiddle encyclopedia articles (including the article images and facts) can be freely used under Attribution-ShareAlike license, unless stated otherwise. Cite this article:
Betty Fussell Facts for Kids. Kiddle Encyclopedia.