Bettys and Taylors of Harrogate facts for kids

Yorkshire Tea was introduced by Charles Edward Taylor and his brother in 1883, creating their company, CE Taylor & Co., which was later shortened to "Taylor's". The brothers later opened "Tea Kiosks" in the Yorkshire towns of Harrogate and Ilkley, and in 1962, local tea room competitor 'Betty's' took over 'Taylor's', renamed it 'Taylors of Harrogate' and formed Bettys and Taylors Group, which still to this day, is owned by the family of Fredrick Belmont, who founded 'Betty's Tea Rooms'. The Group now uses the 'Bettys' and 'Taylors' brands in a number of industries including Yorkshire Tea and Taylors Coffee Merchants under the 'Taylors of Harrogate' name and Bettys Tea Rooms, Bettys Cookery School and Bettys Confectionery under the 'Bettys' brand.

In 2007 Bettys and Taylors was 72nd in a list of "the 100 best companies to work for" compiled by The Sunday Times.

The first Bettys tea room was opened on Cambridge Crescent in Harrogate, West Riding of Yorkshire, by Frederick Belmont, a Swiss confectioner, in July 1919. The Harrogate tea rooms later moved to their current position on Parliament Street.

Belmont arrived in England at King's Cross railway station and boarded a train to Bradford as much through luck as judgement, for he spoke very limited English and could not recall the address (or even the city) to which he was supposed to be heading. In 1922, Belmont opened a craft bakery in Harrogate, which meant it was possible to open more tea rooms, including branches in Bradford, Leeds and York (the latter, the biggest branch, opened in 1937).

The origin of the Bettys name is unknown. The company's website suggests four possibilities: Elizabeth Bowes-Lyon, mother of Queen Elizabeth II (which seems unlikely as she did not come to public prominence until marrying the Duke of York in 1923); Betty Lupton, former manager of the Harrogate Spa; the daughter of a previous occupant of the Harrogate premises who died of tuberculosis; or a small child who interrupted a meeting at which the choice of name was being discussed.

In 1986 Bettys by Post was developed, initially a mail order company, but later moving online. In 2001 Bettys opened a cookery school on the same site as their craft bakery, at Plumpton Park near Harrogate.

Bettys marked their 90th anniversary in July 2009 with afternoon tea of patisseries, fancies and cakes from the past served by waitresses dressed in period costumes. 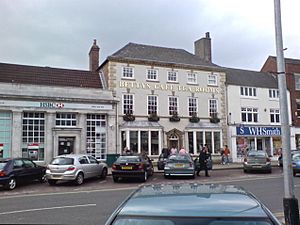 There are currently six Bettys tea rooms, which all comprise a shop as well as a café. The locations of the tea rooms are:

The St Helen's Square café in York was inspired by the magnificent RMS Queen Mary cruise liner and became particularly popular during the Second World War when the basement 'Bettys Bar' became a favourite with hundreds of American and Canadian 'Bomber Boys' who were stationed around York. 'Bettys Mirror', on which many of them engraved their signatures with a diamond pen, remains on display at the branch today.

Until 1976 there was a Bettys tea room in Commercial Street, Leeds, in premises now (as at February 2008) used as a mobile phone shop. There was also a tea room in Bradford, on Darley Street.

Bettys have refused many times to open a branch outside Yorkshire, saying that keeping Bettys small means a watchful eye can be kept on every detail.

All content from Kiddle encyclopedia articles (including the article images and facts) can be freely used under Attribution-ShareAlike license, unless stated otherwise. Cite this article:
Bettys and Taylors of Harrogate Facts for Kids. Kiddle Encyclopedia.