The Bhaati Gate is one of the 12 old gates of Lahore's walled city, now in Pakistan. It dates from Mughal times. 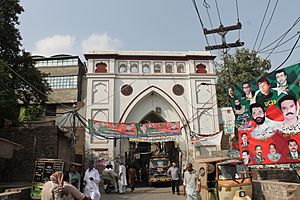 A view of the Bhaati Gate today

The Bhaati Gate was named after the Bhatti tribe of Rajputs who used to live here in large numbers. It also has an old bazaar, or market called Bazaar i Hakiman (Bazaar of the Doctors) where traditional doctors or medical experts, used to help sick people. Another famous place here is the Fakir Khana Museum, made by the Fakir Family.

Bhaati area also has many other old buildings and shops etc., that are of interest to tourists.

All content from Kiddle encyclopedia articles (including the article images and facts) can be freely used under Attribution-ShareAlike license, unless stated otherwise. Cite this article:
Bhaati Gate Facts for Kids. Kiddle Encyclopedia.