Bhupathy's purple frog (Nasikabatrachus bhupathi) is a frog species belonging to the family Sooglossidae. lives in the Western Ghat mountains in India. It is a purple cave frog that lives underground almost all the time.

Many species of frog dig underground a little, but Bhupathy's purple frogs live undergound almost all the time. They have front limbs shaped like shovels for digging and long noses so they can stick their tongues aboveground and lick the surface to catch ants to eat. They do not have shoot-and-pull-back tongues like other frogs.

Adult frogs have purple skins and a thin blue ring around each eye.

The frog has one close relative, the purple frog, N. sahyadrensis, which was first found in the Western Ghats in 2003. 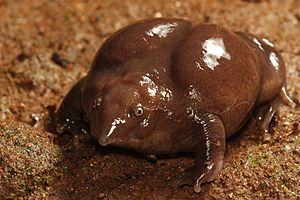 Bhupathy's purple frog looks like its close relative N. sahyadrensis (shown) but it has light purple skin and a blue ring around its eye.

The tadpoles do not swim in ponds or streams. Instead, they grab the stones behind waterfalls, where they spend six months eating algae. Young frogs, called imagos, have brown skin. They turn purple when they are adults.

Adult frogs only come aboveground when the rain falls at the beginning of the northeast monsoon season, when they find mates.

Scientists from Hyderabad's Center for Cellular and Molecular Biology discovered the frog in 2017. They named the frog after scientist Dr. Subramaniam Bhupathy, who died in the Western Ghat Mountains in 2014. They wrote about N. bhupathi in Alytes, the official magazine of the International Society for the Study and Conservation of Amphibians. They found N. bhupathi by listening for frog sounds coming up from underground.

"This frog lineage is very ancient, and has a very low diversity, so this finding is very special and unusual," said Elizabeth Prendini of the American Museum of Natural History, who helped write the scientific paper about the discovery.

The scientists did not to say exactly where they found the sample frogs because it was on private property.

This discovery was paid for by the Indian government in a project to sample the DNA of every frog in the country.

Some scientists said that because N. bhupathy, which lives in India, has close relatives in the Seychelles, which are close to Africa, it is likely that the Gondwanaland idea of why the continents are where they are is right. This idea says that Africa and India used to be one large continent, called Gondwanaland.

All content from Kiddle encyclopedia articles (including the article images and facts) can be freely used under Attribution-ShareAlike license, unless stated otherwise. Cite this article:
Bhupathy's purple frog Facts for Kids. Kiddle Encyclopedia.